Indications: Anxiety over life purpose and a compulsive need to do things in a hurry.

Thunderbird Rocks are giant spherical concretions comprised of sandstone tightly cemented by calcite.
From 10 to 20 feet in diameter, they sit in a hilltop field overlooking the Solomon River valley in Kansas.
This is one of three clusters totaling 200 giant boulders in the National Natural Landmark park called Rock City.
Such giant spherical concretions are found in only a few locations on Earth ~ they are also in a quartzite quarry in a
neighboring county in Kansas, along the Cannonball River in North Dakota, in northeast Utah, in central Wyoming, and on
the beaches of New Zealand (“Moeraki Boulders” on the South Island and “Koutu Boulders” on the North Island).
Nowhere are they found in as large a number as on these hillsides in Kansas.
Smaller spherical concretions, known as “kettles,” are found on the shore of Lake Huron near Kettle Point, Ontario 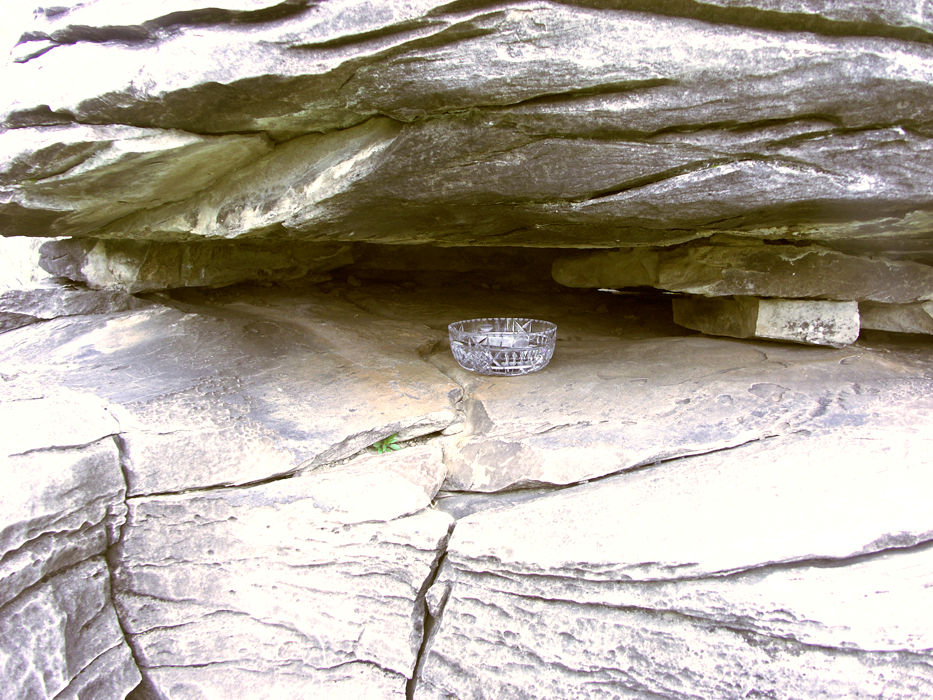 You have been born into an age when the Earth and her inhabitants are going through a great transitional state. You have encoded within your DNA and cellular memory a knowledge of this. As time grows nearer, there is an intensity in your physical body that can give you feelings of anxiety as you flounder with your role, wondering..... Have you done enough, have you worked hard enough or fast enough? What is your life purpose? Will you be too late?

The Thunderbird Rocks essence helps to take this obsessive energy within you and channel it for ultimate power flow by helping you to learn to balance
the power of this negative anxious force with the power of the positive consciousness of the Universe. 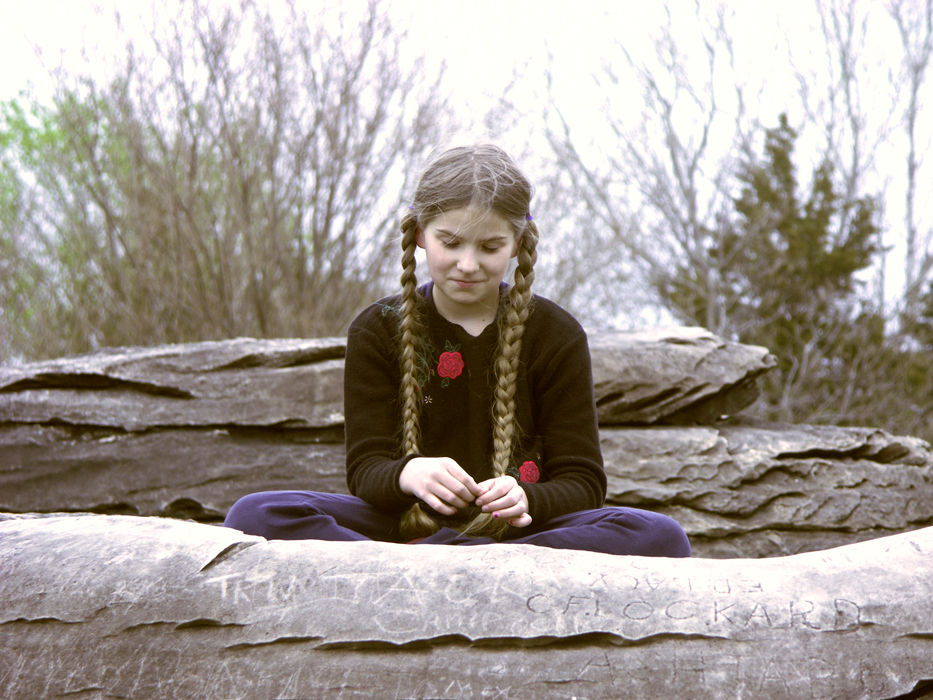 As you look outward you maybe feel assaulted and defeated by the dark, fearful energies of this time period which can make you worried or despair-full at core levels.

Although you are not meant to close your eyes to the pervasive dark, we must harness your access to the Greater Consciousness that is awakening throughout the world and learn to hold your focus to the visions of the progressive good.

The essence of Thunderbird Rocks helps to calm core anxiety and fear by connecting this energy to the courageous, heroic, valiant self and when these positive and negative energies meet the electrical result is Power ~ Power that can transcend and move you into a truly Golden Age. 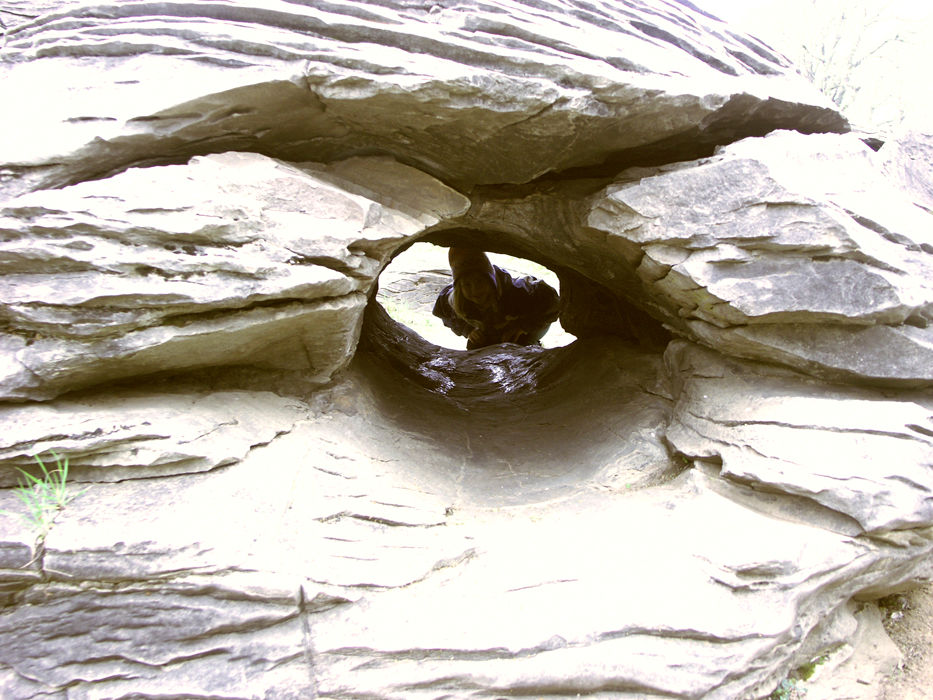 Listening to the Rocks

Our true heritage and history as spiritual beings on this Earth has been repeatedly secreted away by history’s many ruling powers..... emperors, pharos, the Roman Catholic Church to name a few.

Most are only allowed to view what little record history has recorded yet the powerful and enlightening questions about our ancestry
are unanswered as we look at the ruins, mounds and fallen temples of the Earth. Who are we? What is our destiny? What is our power? What is our responsibility? 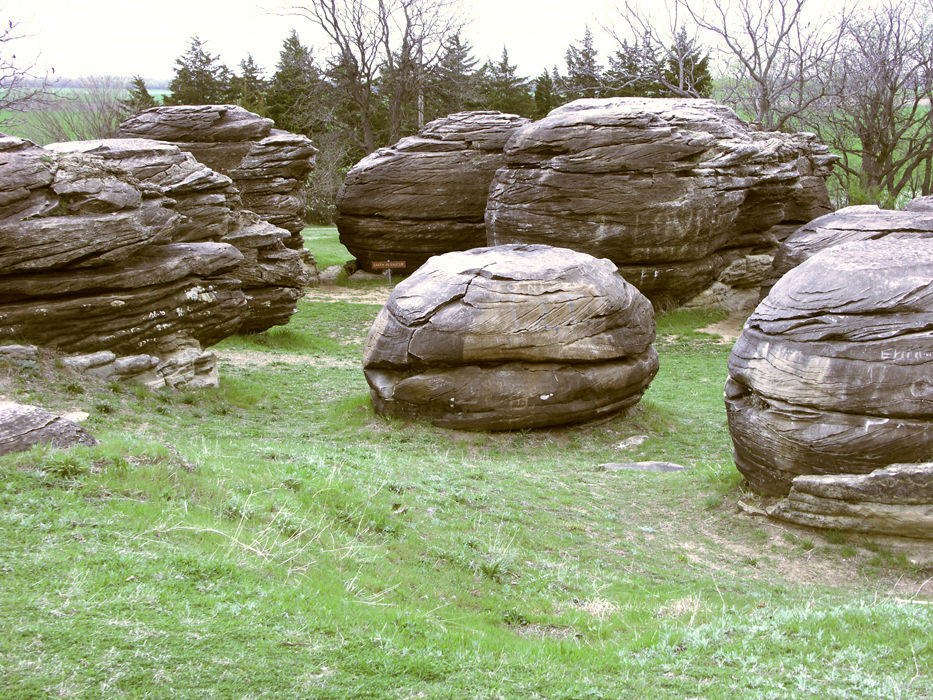 Earth’s history may be much older and much more fantastic than endorsed by current Scientific opinion.

There are traces left throughout the Earth hat tell of other civilizations with math, medicine, and technical skills that rivaled and perhaps surpassed modern capacities.

In our attempts to understand the past we must learn to listen deeply to the indigenous wisdom that has been handed down generation to generation in story and song and learn to tune into the ancient imprint that remains in the Earth’s memory that is encoded within the site itself. 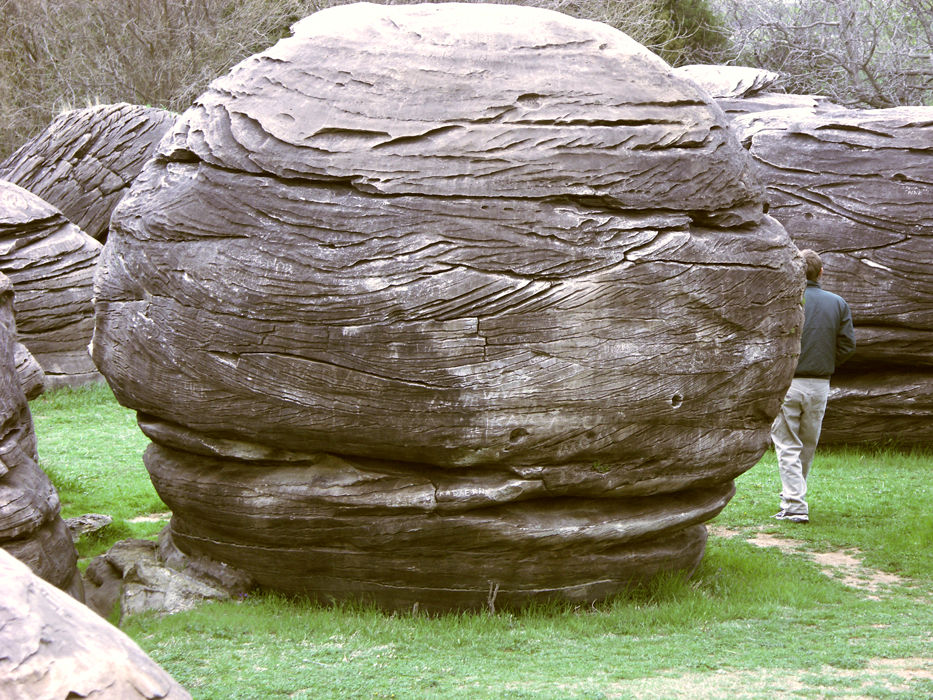 Modern Science has little to nothing to say about the over 200 “concretions” found on this peaceful hilltop overlooking the Solomon River Valley in North Central Kansas.

In an area the size of two football fields these ancient round rocks sit..... some 27 feet in diameter and 10 feet tall.

There is no other place in the world where there are so many concretions of such giant size. Yet everywhere they are found throughout the world they are considered an anomaly unlike anything else in the landscape and cause for wonder.

Modern man has classified them geologically “hard compact mineral matter that grow inside sedimentary rocks”, and there are accepted theories about their formation. Millions of years of history may become flattened into a few words.

Oral traditions, filled with archetypes, may give us a truer history..... one that can not only help us see a picture of the past but also holds lessons and information important to our spiritual growth and our survival in this age.

The stories communicate that these were left behind as the “eggs” of the Great Thunderbirds who were the “First people” of the great plains.The thunderbird could change its size or appearance. It could make itself invisible, and it was immortal. Known as Wakinyan ~ meaning “winged one possessing sacred power.” 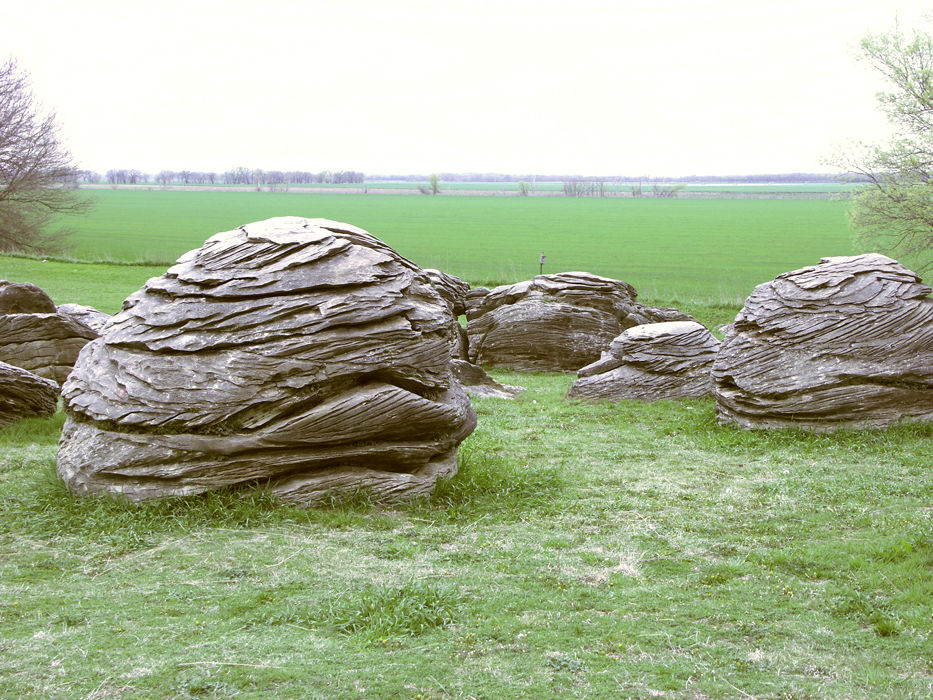 The lands here were so flat, and the Thunderbird flew at such speeds it needed level runways for landings. Kansas was a great desert without vegetation, water or even wind. So the Thunderbird had to fly to the Great Lakes for a drink.

It happened on one hot summer day several million Thunderbirds started Northeast for water, and their tremendous force started a strong breeze from the Southwest. That breeze is still evident today.

Is it possible that this story tells of an earlier race that fled to the Sky in such mass as to cause a shift in Earth’s atmosphere? Clear complete pictures of history
we will never get to see as even our own histories become muddled and interpreted through the memory’s dim lens.

The hard facts so revered by our culture may keep us mesmerized in clinical study unable to access the true messaging of the past. It is sometimes in the poem heard, the scent caught, the breeze whispered that we receive what we need to know.

The Thunderbird is a powerful archetype present throughout the world..... the winged messenger..... powerful, intelligent, wrathful. With different names in different cultures ~ Roc of Persia, the Angels of the Old Testament, Thor of Greek mythology ~ all stories carry similar threads.

There is so much to be gained from listening to and intoning the oral teachings.

This is a place of significance on the planet, and the over 200 Thunderbird Eggs here hold memory of the emotions and dramas of a very ancient past. The Rocks (or Rocs!) here are Thunderbird Eggs indeed because they contain the codes and messaging that we need now to help our race survive into the future.

We are at a turning point for mankind, and as Earth begins to shift her magnetic poles the polarities within us must come into alignment with the electromagnetic elements of universal intelligence.We must acknowledge the transitionary period we have entered and the challenges we must face.
If we continue to hide our heads in the sand we will perish.

The rocks here were left by an ancient race that created a desert environment with their technology. Not a seed was left, and the water was all gone. They had to leave in a hurry, racing before a great disaster.

The Wind that they generated created the Chinook ~ or the Dry Spring Winds ~ that blow off the Eastern side of the Rocky Mountains. The balmy Spring air brought by these Winds holds the ionic charge...... the same as those generated by a Thunderstorm. This headwind helps to carry the messaging across the land. The messages of an ancient race who knew that in the deep future another race would come to this point.They left us a sign ~ 200 Thunderbird Eggs in the Heartland of the greatest consuming and most polluting industrial race in recent history. The Thunderbird messengers speak: “Listen, hear and understand. We beat our wings. 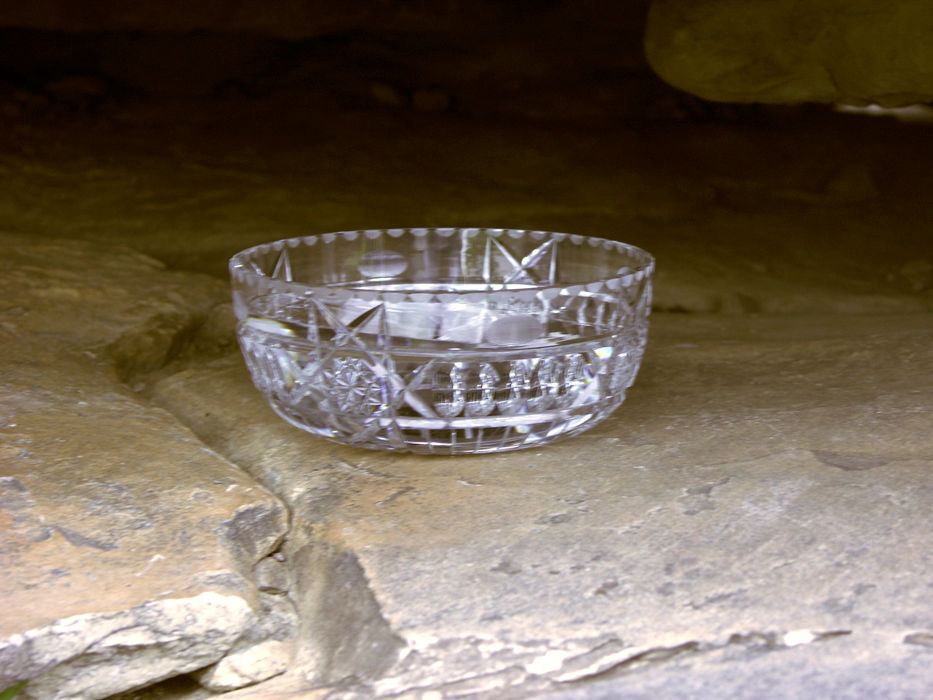