Mass Fears/ Not Thinking For Self

Indications: Settles unfounded hysteric feelings and fears projected by society, community, or mob mentality. Helps one to think for oneself and act out of rational wise choices. 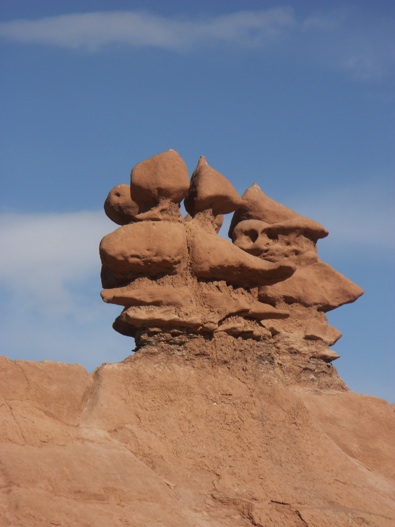 According to general geological definition, ʻHoodooʼs are oddly shaped pillars of rock that have developed through erosion by wind and water. They are composed of soft sedimentary rock, like sandstone, topped by a harder, less easily eroded stone that protects the column from the elements. I do understand the explanations of geology; however, there is something very eerie walking among these forms that is not encompassed by this flat, simplified definition. You can feel a life form coming from these stones, a life trapped or sorrowfully lost, that has somehow been stopped in its evolution for some unknown reason.

Indigenous legends about the forms appearing throughout the world impart perhaps a deeper knowing of the messages Nature leaves us and interpret Hoodoos, instead, as humans and animals turned into stone by the Creator for some misdoing. The Apaches tell this legend of Texasʼ Palo Duro Canyon: The Creator Spirit let loose a great flood when he was upset with the peoples of the Earth (similar to the story of Noahʼs Ark). The Tribe believed that he, Creator, favored the Apaches and was willing to give them shelter from the rising water. However, a group of selfish men rushed up the hills to save themselves with no regard for the women and children. The Creator was angered by the greed of these men and punished them by turning them to stone. The formations are, then, the petrified men who abandoned their tribe. Here in Goblin Valley in central Utah the thousands of Hoodoo forms all face the same direction, like a procession of soldiers moving hypnotically together down the valley and now frozen in time. 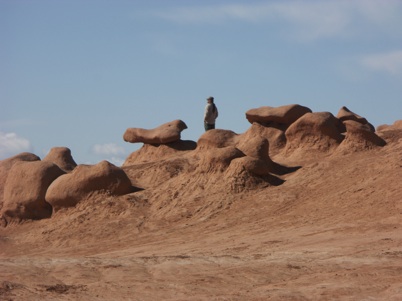 Guardian Stones essence helps one snap out of the spell of group mentality and wake up enough to see what is really happening, to be able to think and act rationally and with good judgment. A beneficial essence to teenagers and others who struggle to hold their own in socially stressful situations, the essence supports individuality, discernment and clear-thinking. Shadow forces are very evident among the Hoodoos,
as one shadow overlaps the next and the forms seem to influence each other in an almost spell-like manner. When one chooses to do what others are doing just because they are doing it, one disregards oneʼs human responsibility to discern and act from a place of understanding and accountability. Guardian Stones essence assists one in maintaining the self-awareness needed to not lose oneʼs identity to mass fears and agendas that may lead one, seemingly unaware, over the proverbial cliff with the rest of the blindsided herd.