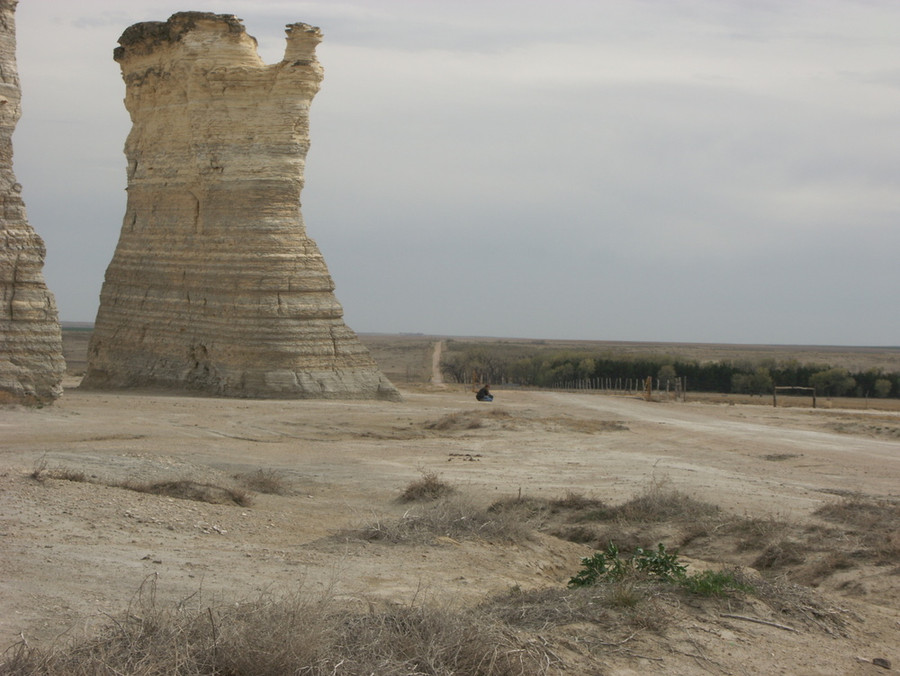 Indications: Helpful when you are feeling drained or eroded by life's trials and stresses... allows your inner ears to open to the vibrations of the Earth, helping you to feel more stable by reconnecting to the Earth's wisdom.

The Chalk Pyramids or Monument Rocks are names for the same group of 70ft sedimentary Niobrara rock outcroppings in central Kansas. The pyramids seem an anomaly rising out of flat desert like grazing land and spreading out in over 10 arces of bluffs, arches and towers. Once under ocean waters local people say after a heavy rain the region still smells like an ocean bay. The day this essence was made the wind was blowing so hard that two of our children had to brace my tripod as copious amounts of eroding"chalk" blew in the strong gales around us sometimes obscuring our vision almost completely.

There is currently a tension between the Earth and her human inhabitants ~ a tension caused by man’s accelerated focus on material acquisition, self-serving technology
and inability to respect the sacred presence of the Natural Realms. The Earth is an ancient Deity in continual birth and transformation..... the deserts of this Earth were once lush fertile gardens.....
Volcanoes continue to reshape Mountains, and Floods change the course of Rivers. As mankind ~ on a path of self-interest and illusionary domination continues to alienate itself from other life forms,
the Earth prepares for a sacred transformation.

This essence helps you to open your inner ears to the Earth’s many urgent messages and to strengthen your nervous systems to sustain the human-wrought tensions of modern society. As you become more conscious and connected to the intelligence that supports you, you begin to reconnect to the Earth and her ancestral wisdom. The Chalk Pyramids essence helps to restore your receptors, as layer after layer of tension is released. What is nonfunctional or superficial is drawn back into the Earth for renewal. Then your essential human form is able to stand tall and act as a true “cell” tower for higher communication.
As you become more sensitive and in sync with natural currents your relationship with the Earth heals, and you are able to feel increased levels of support and protection.